Great article in this Sunday’s New York Times on six new restaurants where they said the food is so good, you’d want to go even if their prices weren’t so low.  Copied the article verbatim as I couldn’t improve on it one bit. 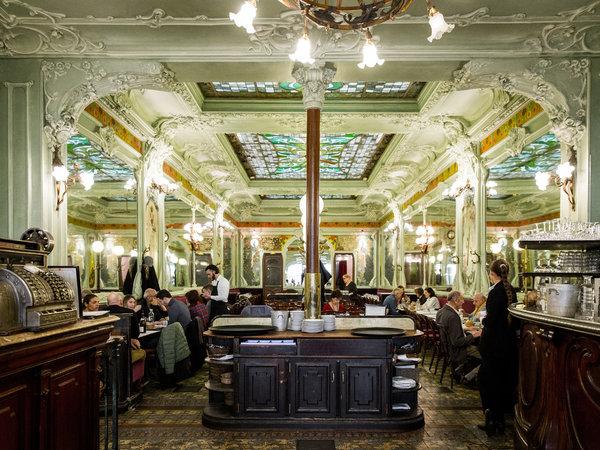 “On a drizzly night in Paris, a crowd spilled out the door of Bouillon Julien and onto the slick sidewalk lining the rue du Faubourg Saint-Denis. The lure was a bargain-priced meal that promised to be surprising for both its quality and reasonable price: less than 20 euros, or about $23, for a three-course dinner with a glass of wine.

Even before the gilets jaunes, or yellow-vested demonstrators, first took to the streets of the French capital last November to protest higher fuel taxes against a backdrop of declining middle-class buying power, Paris was in the midst of a revival of its budget-priced dining scene. The surprise is the difference between the new places and those rock-of-ages cheap addresses in guidebooks for budget travelers, restaurants with menus so immutable that three generations of the same family might have had the same shoe-leather-tough boeuf bourguignon during their penny-wise visits to Paris. The food at many of these recently opened restaurants is often so good you’d want to go even if their prices weren’t so low.

The new affordable dining trend is no more evident than in the comeback of the city’s bouillons — those working-class restaurants that thrived in Paris during the 19th century. “In an age of globalization, eating a meal at a bouillon is an affirmation of Gallic identity, since the comfort food we serve is so traditionally French,” said Christophe Joulie, director of the Groupe Joulie, which owns and runs a number of brasseries in Paris, along with Bouillon Chartier, the 1896 vintage bouillon the company acquired in 2006.

By “traditionally French,” Mr. Joulie was referring to dishes like marinated leeks, canard confit (duck preserved in its own fat) and choucroute Alsacienne (sauerkraut garnished with pork and sausage). “Everyone loves a bargain, especially at a time of economic uncertainty.” he said. “A three-course meal of freshly cooked, on-the-premises food for 20 euros served in 30 minutes — has never been more popular.” (So popular, that Mr. Joulie revived the original second address of Chartier near the Gare Montparnasse on the Left Bank in February.)

So whether you want traditional French comfort food — perhaps a soothing blanquette de veau (stewed veal in cream sauce) — or prefer something more inventive like the terrine of pot au feu with salad and pickled vegetables recently served at Le Cadoret, you can now find restaurants, many in quiet, outlying residential neighborhoods, where a memorable three-course meal won’t cost a small fortune. Here are six of the best.” 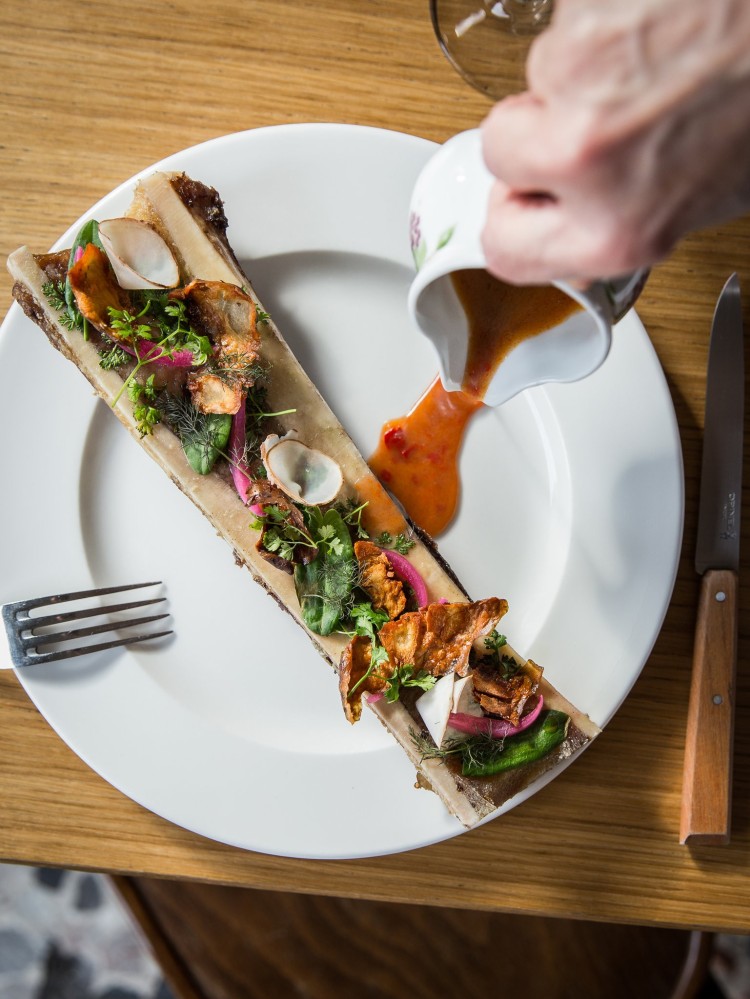 Not only will you get a very good French meal here, you will also be served in one of the most beautiful dining rooms in Paris: a landmark 1906 vintage space in the gentrifying 10th Arrondissement, with an original pewter-clad mahogany bar by the famous Art Nouveau artist Louis Majorelle, and four stained-glass murals by Louis Trézel.

Until recently, this space was called Brasserie Julien, part of the now-defunct Brasserie Flo chain. An average three-course meal here ran about 60 euros. When the new owner, Jean-Noël Dron, bought it last year, he wanted to reboot it for the 21st century, so he followed the motto of the founder, Edouard Fournier: “Ici, tout est beau, bon, pas cher” (“Here, everything is beautiful, good and inexpensive”). He also hired the chef Christophe Moisand away from the Hotel Westminster to produce a changing menu that runs to lentil salad with duck foie gras, grilled sausage with potato purée, and chocolate mousse.

A recent lunch included pumpkin soup and a casserole of Belgian endive wrapped in ham in Mornay sauce, a satisfyingly sturdy dish that made me nostalgic for the French grandmother I never had. The crème caramel tasted as though it might have been made from a mix, but a small carafe of the house white wine for 3.40 euros was just fine. They take reservations, so book in advance to skip the line.

Only in Paris, will you find such a nonchalant juxtaposition of gastronomy and pornography as the one in the city’s Pigalle district, which has become a hipster neighborhood on its side streets but still recalls Times Square circa 1980 along its boulevards. Erotica is not the reason for the long lines at both lunch and dinner at the two-year old Bouillon Pigalle, however. This place serves satisfying dishes from a menu that changes regularly.

Dining with a friend from Los Angeles, who was as skeptical as I was that we would eat well for so little money, we were seated for dinner — after a 20-minute wait — in a lively 300-seat dining room spread out on two floors. We started with three Gallic classics: oeufs mayonnaise, soupe à l’oignon and foie gras with onion jam. We were especially surprised by the quality of the unctuous, fully flavored foie gras. Generous main courses of blanquette de veau and salmon in sorrel sauce were full of flavor; homey desserts include rice pudding with caramel sauce and île flottante (small clouds of fresh meringue atop a pool of sauce anglaise). It’s even possible to add a 50-centiliter carafe of house wine to your order and still get away for 20 euros a person. No reservations, so get here early or late — they serve nonstop from noon to midnight seven days a week. (A second branch of Bouillon Pigalle is scheduled to open near the Place de la République later this year.)

For the French, Les Routiers, an association of mostly roadside restaurants represented by a graphic sign of the same two words in white sans serif letters on a circular, blue-and-red background, strums chords of happy 1950s and 60s nostalgia — similar to those once evoked by the orange roofs of the Howard Johnson’s restaurant chain in the United States. The difference is that the French label — which was founded in 1937 when two journalists published “La Route Facile,” a guide for truckers that highlighted restaurants with good cheap eats and useful facilities — had a blue-collar, rather than middle-class family, allure. Now Margot and Félix Dumant, twins from a restaurant-owning family, have mined the chain’s retro appeal with several studiously decorated bistros that serve up a menu so profoundly Gaullish that Charles de Gaulle himself would probably have crowed with pleasure.

Aux Bons Crus, which is part of Les Routiers and one of four within Paris, has been a hit ever since it opened last fall in the 11th Arrondissement.

A friend and I recently had an excellent meal that included beet salad with a mimosa garnish (sieved hard-cooked egg); curly endive salad with a poached egg and lardons (chunks of bacon); stuffed cabbage and quenelles de brochet (pike perch dumplings in a pale pink crayfish sauce) from Bobosse, a celebrated charcutier in Lyon; and a shared order of Crêpes Suzette flambéed in Grand Marnier. The menu changes monthly. 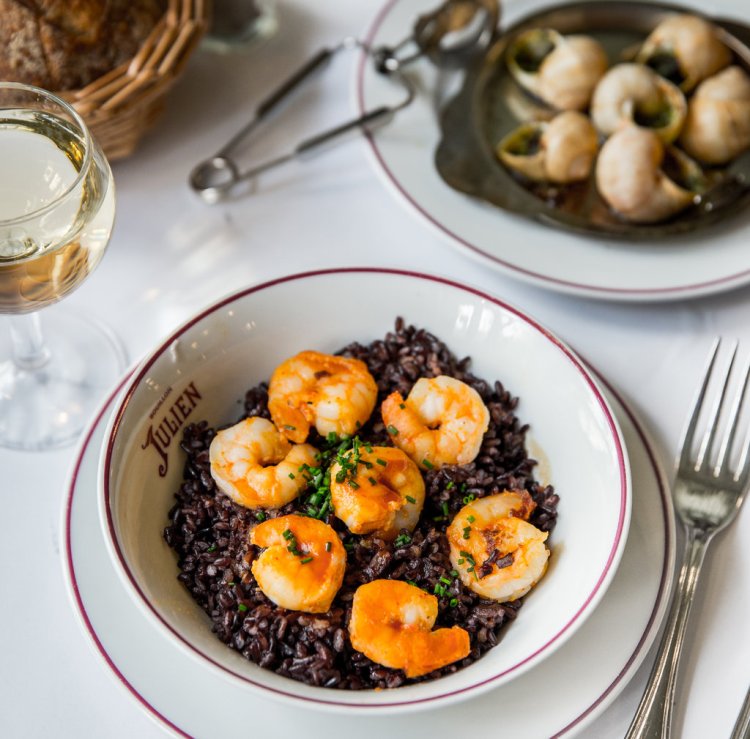 In the 1980s, the Bastille district was the city’s young night life zone, not unlike Williamsburg, Brooklyn, in its early heyday. Now people come here for another reason: its restaurants. One that locals don’t want you to know about is this almost year-and-a-half old Buffet, an annex of Au Passage, a popular modern bistrot à vins, on a side street. With a 1950s-style cracked-tile floor, globe lights and wood tables, it looks like the subject of an Édouard Boubat photograph of postwar Paris, and it pulls a loyal crowd of regulars (some who make a daily appearance), drawn by the contemporary dishes listed on the chalkboard menu. The great buy here is the prix fixe menu at 16.50 and 19 euros served on Saturday, the only day they’re open for lunch. For dinner you can order dishes that might include lentil salad with fresh goat cheese, lamb-and-prune Parmentier (a French take on shepherd’s pie), roasted free-ranged pork belly with greens, and a runny chocolate-chestnut cake by the Portuguese chef Luis Miguel Andrade for less than 25 euros, without wine.

It’s a bit of a trek to get to Belleville, the working-class neighborhood on the northeastern edge of Paris where Édith Piaf was born, but food-loving locals and visitors have been heading to this gentrifying, but still earthy and unpretentious neighborhood for years to eat at Le Baratin, one of the best bistros in Paris.

Good as it may be, it’s now expensive, and it can be tough to land a table. So try Le Cadoret, a modern bistro housed in a former belle epoque cafe, instead. The cornflower-blue facade has big picture windows, and inside there’s an indigo-painted zinc-topped service bar, open kitchen and wooden tables with cloth napkins and French-made Opinel knives. These latter details subtly announce the seriousness and sincerity with which the Fleuriots, a sister-and-brother team — Léa cooks and Louis-Marie runs the dining room — created their restaurant. Named after their grandmother’s farm in Normandy, the restaurant is all about quality — the cooking, the hospitality, the wines and décor. After an excellent three-course prix fixe lunch for 20 euros — tiny mussels cooked in a creamy saffron-spiked bisque, haddock in a coriander court bouillon with mushrooms and potato purée, and baked apple lashed with caramel, I came back for dinner: pickled candy beets with faisselle (fresh cheese), steak with homemade frites and Béarnaise sauce, and a quivering, bubble-pocked, caramel-laced eggy-tasting crème caramel. They also offer a two-course lunch menu for 17 euros.

The serial restaurateur Florent Ciccoli has his finger on the pulse of what food-loving young Parisians like to eat these days, and he also knows what they’re willing to spend. This is why his revamped corner cafe, with a copper-fronted bar and retro green-and-topaz wallpaper, just off the Place Léon Blum in the 11th Arrondissement, has become such a hit since it opened two years ago. Mr. Ciccoli understands that younger Parisians have more cosmopolitan tastes than their parents, which means their comfort foods are as likely to come from Italy, Lebanon and North Africa as the Perigord or Provence. This is why variously garnished pizzettes, or individual pizzas made with fluffy yeast-raised dough, have become a signature starter of the three-course, 20-euro lunch menu here, a meal so popular that reservations are essential. A recent lunch here with a friend included a pizzette topped with melted taleggio cheese and studded with fleshy black olives, and a cultural mash-up of pork kefta (these meatballs are normally made with lamb in the non-pork-eating Muslim world) with salad and labneh. Main courses were excellent, too, including a rump steak topped with a thin slice of foie gras on potato gratin, and cuttlefish with Espelette pepper and winter vegetables. At dinner, small plates are served a la carte, including caillette — a caul-fat wrapped herb-filled sausage patty garnished with pickled mustard seeds on a bed of potato purée, or blood sausage with roasted corn and guindillas (pickled green peppers from Spanish Basque Country). Desserts are excellent, too, including mirabelle tart with frangipani, or lemon tart with candied grapefruit peel. 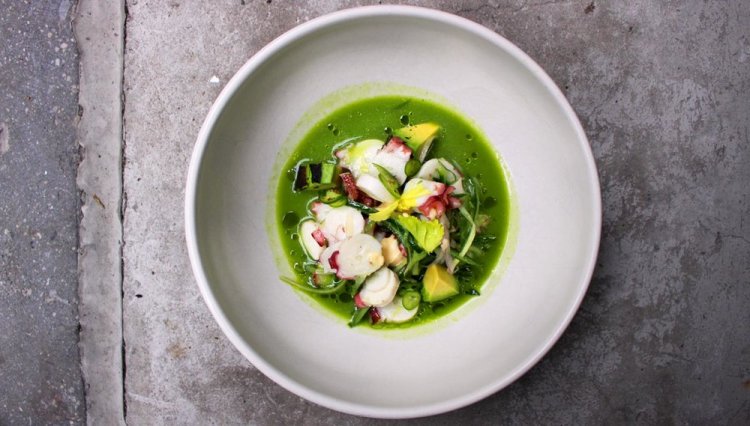