Great article in the Sunday Travel section of the NYT today.  Copied it verbatim to use in my planning of my trip to Greece.

The peaks of Mount Parnassus shimmered on a warm spring afternoon above the temples of ancient Delphi. In a verdant valley below, silver-tipped olive trees stretched to the sea. The sun traced a golden arc in the azure sky. On a flat plateau surrounded by this natural theater, I looked up to find myself standing at the center of the world.

At least, the center of all things as the ancient Greeks knew it. In front of me was a black ovoid stone, known as the omphalos, set on the spot in Greek mythology where two eagles loosed by Zeus crossed paths at the earth’s nexus. It marked Delphi as one of the greatest enigmas of the ancient universe.

I had come for what was supposed to be an afternoon visit during a recent trip to Athens. Delphi is best known as the home of the famous Oracle — a powerful priestess who saw the future of kings and nations — and I wanted at least a glimpse of the mystery before pressing ahead with my travels.

You can get to the gulf in less than half an hour by car. But that drive should be turned into a third full day of discovery, visiting scenic villages that antiquity’s travelers would have passed on their way to Delphi from the gulf. In springtime, the villages bolt to life with Carnival festivals celebrating pagan customs.

Ancient Delphi is a short bus ride or a pleasant walk from town. A wide road hemmed in by pines, laurels and cypresses leads to the entrance and up toward the Sacred Way — the path taken by King Oedipus, Alexander the Great, the Roman Emperor Nero and countless ordinary men and women determined to hear the Oracle’s pronouncements.

With Apollo’s priestess as the main attraction, Delphi’s renown grew as Greece’s wealthy city states, and powerful conquerors, built sumptuous treasuries filled with rich offerings to encourage the sun god to favor them in war and politics. Many paid tribute to victories gained through the Oracle’s guidance — and Apollo’s help — with grandiose sculptures, including a giant silver bull and a replica of the Trojan Horse.

Despite the ancient bling, Delphi’s supremacy as a sacred power center was epitomized by the simple stone omphalos that had riveted me during my visit — what the Greeks called the “navel of the world.” While the temples have crumbled, seeing the omphalos gave me goose bumps, and left me awe-struck over Delphi’s sublime place in history.

At the top of the Sacred Way, the Temple of Apollo, now razed to its foundations, greeted visitors with these wise words: “Know Yourself,” and “Nothing in Excess.” Inside, the Oracle, a woman older than 50, would sit entranced over a crack in the earth answering questions. A centuries-old debate still rages over whether her divine inspiration came from an ether-like vapor formed by an ancient water source, the nearby Castalian Spring.

Whatever the truth, visitors can explore the remains of the spring in a rocky crag near the Delphi museum, an archaeological time capsule whose centerpiece is an exquisite, life-size bronze statue from 475 BC known as the Charioteer. With flowing robes, gems for eyes and regal poise, this masterpiece by an unknown artist embodies the mystery of Delphic lore.

The next day should be spent visiting the Corycian Cave, an obligatory stop for ancient supplicants after encountering the Oracle. A three and a half-hour trek (each way) from the ruins, this sanctuary for the nature god Pan dates to the neolithic era. The hike starts above Delphi’s marble amphitheater and winds through lovely pine forests. At each turn, there are outstanding views over the ancient site. In hot summer months, those preferring not to sweat it out can also drive.

After a long day, it’s essential to refuel at a traditional Delphi taverna. To Patriko Mas, with a stunning position overlooking the valley, is a lively gathering spot offering charcoal-grilled meat and fish, as well as roast peppers, stuffed mushrooms and other vegetarian fare.

Head out the following day to explore the path that ancient visitors took to get to the Sacred Way. This should be done in reverse order, starting in Delphi and ending with dinner at Galaxidi, a charming fishing village on the Corinthian Gulf.

I left Delphi by car and headed down the mountain to Chrisso, a once-powerful city-state that dates to the 12th century B.C. Now a small stone village, Chrisso sparkles with tiny churches and water gurgling through granite gutters from a spring sourced in Mount Parnassos. Locals divert the water to their gardens to grow a local treat — baby vegetables, which are candied in sugared syrup. These should be sampled with a strong Greek coffee at one of the tavernas in the central square.

I continued toward the cliffside town of Amfissa, a prominent citadel in Delphic times. Named for Apollo’s lover, it had its own Acropolis and a stretch of Cyclopean walls. Today, old ladies wearing kerchiefs and crocheted skirts navigate the road with canes and a slow step.

A castle was built atop the ancient wall during Ottoman rule, with a view of the valley. When I visited, the almond trees were in bloom. Slow-moving honey bees filled the air with a low hum and the sweet perfume of nectar. Nearby, an old tannery is said to be protected by the spirit of a youth whose quest for love ended in tragedy. In spring, the villagers put on a raucous nighttime carnival in his honor, dressed as ghosts and fairies with elaborate masks and animal bells. 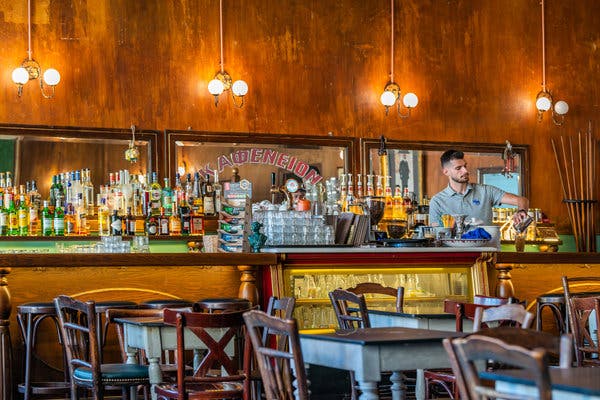 Pause to sample local wines, cheeses and olives at Megalo Kafeneio 1929, a converted theater house with a dusty 1930s décor in Amfissa’s main square. Then continue, as I did, toward Itea, a modern port located next to the ancient harbor of Kirra, where far-flung travelers disembarked to start their journey to see the Oracle.

Today international cruise ships disgorge crowds onto tour buses that make a beeline for Delphi. At a clutch of tavernas on the waterfront, locals nibble freshly caught shrimp and anchovies with a shot of raki in the Corinthian Gulf’s briny air.

Hug the gulf to continue to picturesque Galaxidi, with stout stone mansions, swaying palm trees and a snug harbor. An important center for sailing ships until steam engines came along, ancient Galaxidi was believed to have housed a temple to Apollo. The church of St. Nicholas, the patron saint of sailors, now sits in its place, adorned with a rare solar calendar that tracks the zodiac cycle. A nautical museum holds a unique collection of ship paintings and priceless artifacts, including prehistoric obsidian tools and a 4,000-year-old curvaceous urn called an amphorapulled from an ancient shipwreck.

For dinner, head to To Barko tis Maritsas taverna, a converted coffeehouse decorated with nautical flair. Don’t miss the delicate pearl-pink taramosalata, with a tangy edge of garlic, or the marinated sea bass, cut paper thin and studded with peppercorns.

After dinner, I strolled along the waterfront and looked back across the gulf to catch the sunset. There, as the sky faded to a golden pink, the peaks of Mount Parnassus towered in the distance over the town of Delphi, where gray stone houses clung under orange tiled roofs to the cliffs.

Rising above it, ancient Delphi glimmered from the mountainside like a polished gem — as smooth and simple as the stone at its very heart that once marked the center of the world.