Chuck, Allison, and I traveled to Sicily this October (2016) to eat, drink, and visit the well preserved Greek and Roman ruins.  This is a poor part of Italy, especially since the economic downturn, and truly a value vacation.  But tourism is picking up, especially among other Italians, due to (as one of our guides told us) the fact that they feel safe from terrorist attacks, in the belief that the still active mafia won’t allow ISIS in this territory!

Sicily is a large country so in 10 days and was impossible to travel the whole country.  Our mode of traveling is to stay longer in one spot to get a feel of the  place, meet with the locals, and return another time to see the areas we missed.   So were were only able to cover some of the South & North West during this trip.

Arriving in Catania, we immediately went into the city where a bustling daily market flooded the streets.  They have a large permanent seafood market but on Fridays local farmers and butchers join them, lining the street with stands selling whatever is fresh that day.  I knew Sicily was known for the fresh seafood but this was probably the largest seafood market I’ve seen ever seen. 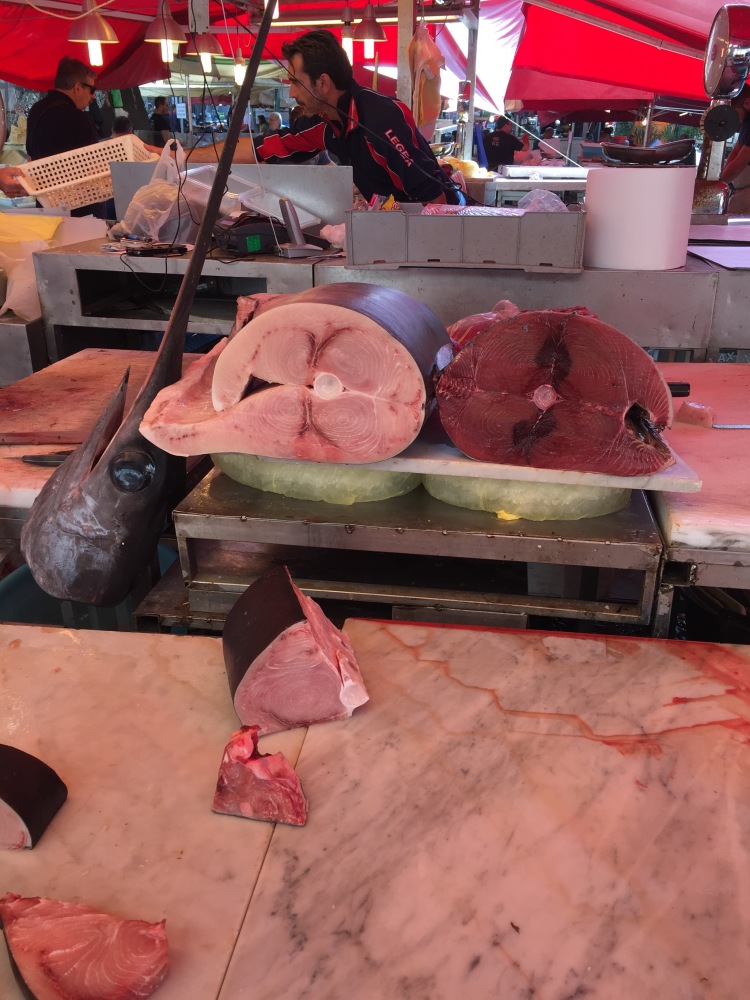 We did a quick tour of the lovely churches and squares, ate some delicious fried small fish, of unknown origin, that had been caught that morning, and then headed to our hotel on the island of Ortigia (in Siracusa).   Ortigia was by far our favorite place.   A lovely island, with small, winding cobblestone streets.  Charming and filled with hidden bars overlooking the water, and restaurants where we had some of our favorite meals.   The hotel, Algila Ortigia Charme Hotel, was lovely and the people who worked there, warm and friendly.  We wished we would have stayed longer than our three days.

Here we found out about our favorite time of day, the pre-dinner drink from 6 – 8 PM, “aperitivo”.  It’s early evening, the sun is going down, people are heading home from work or shopping…and the one phrase you will hear everywhere is “Facciamoci un aperitivo” (let’s have an apertivo)!   It is meant to stimulate the appetite, but in reality it is a dinner spoiler (and oh so fun to do so) as they are always accompanied by lots of snacks.  Our favorite was Piazza Rivoluzione in Siracusa where the buffet of freshly cooked food kept coming…as we watched the chef prepare dish after dish.  Our favorite aperitivo was a Negroni (one part gin, one part vermouth rosso, and one part Campari, garnished with with orange peel) you must try one, or two today at 6PM!!!

Siracusa has a large archaeological Park, Neapolis Archaeological Park, with a well preserved Greek Theatre, Alter of Hieron, and Roman Amphitheater. We also walked the part of the park filled with limestone caves carved out of  the Temenites Hill (the famous one is the Ear of Dionysius).  The cave has exceptional acoustics that amplifies even the quietest of sounds, allowing them to be heard through an opening at the top, 72 feet high.  They are thought to have been ancient limestone quarries and are well preserved as they were perceived as being sacred. We hired a private guide,  viaggioasudest.it, and Enrica De Mello spent three hours with us touring the park.  Definitely ask for her! Hard to believe the immensity of it all.  We ended our day with a tour of he Catacombes of St John. This maze of Greek underground aqueducts were recycled by early Christians into chapels.

The next day explored Ortigia & Siracusa – the Piazza Archinede, the Duomo, Chiesa di Santa Lucia.  The last day we visited the Baroque hilltop city and commune of Noto sitting at the foot of the Iblean Mountains.   Famous for it’s Sicilian baroque architecture, it has dome of the finest examples in the churches and palaces standing tall in this hilltop town. We explored them all, walking these small charming cobblestone streets, and stopping to, of course, sample some wonderful pastries from a local bakery.

The food specialties of the region draws on dishes from the Greeks, Arabs, Normans, and Spanish.  They have a wealth of ingredients that is the fruit of fertile lands and a teeming sea.  The dishes add an extra punch from raisins, capers, herbs, seeds, nuts (almonds & pistachios), beans, lentils, fava’s, citrus fruits, and of course, garlic.  A few of the highlights are Arancini (Sicilian rice balls),  Pasta con le Sarde (with sardines), Pasta alla Norma, Caponata, Pizza, Cannoli, Granita, and fresh fish (tuna, sardines, clams, anchovies, swordfish, and prawns) grilled or saute with fresh tomatoes, garlic, and wine.   We ate them and and were well fed!

We then drove to Agrigento stopping in Piazza Armerina and Villa Romana del Casale on the way.  Piazza Armerina is a city full of artwork and multiple monuments that tell of its glorious past. But the real treasure is the Villa Romana del Casale; originally the property of a powerful Roman family, built between 330 and 360 AD.   There are 3500 square meters of mosaics on the villa’s floors which is considered the most beautiful and best preserved of their kind.  There are also some surviving wall paintings and many of the structure’s walls are still standing.   The art itself is impressive, but you are awestruck by sheer size of the villa.  It was  made a UNESCO World Heritage Site in 1997.

Agrigento is a hilltop city on Sicily’s southwest shore. It’s known for the Valley of the Temples, a vast archaeological site with well-preserved Greek temples and the ruins of the ancient city of Akragas.  Below is the view from our hotels outdoor restaurant. Imagine dining alfresco with the view of these magnificent Doric temples that dominate the hilltop, it is breathtaking.  In the evenings they are lit up, transporting you back into ancient times. 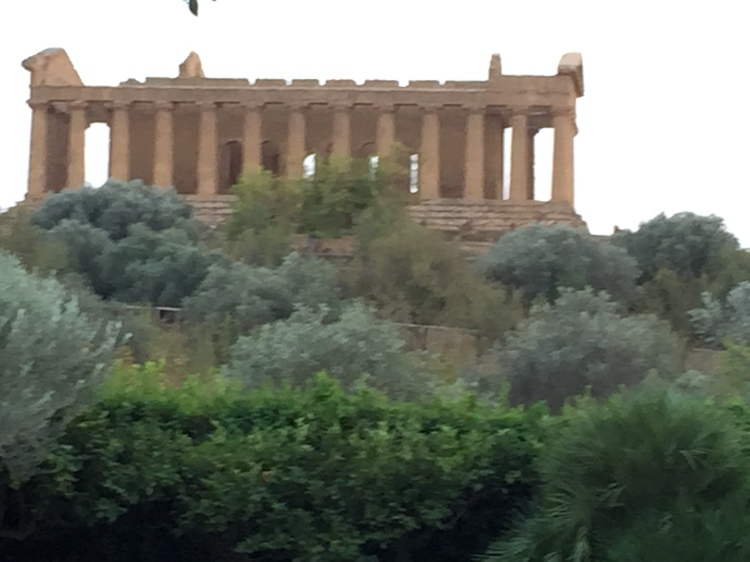 Founded as a Greek colony in the 6th C BC, it became one of the leading cities in the Mediterranean.  It is a special site in the history of the ancient world due to the excellent preservation of the buildings over the ages.  Much of what still remains is intact under today’s orchards and fields, and new, major excavations are currently under way.

Headed to Erice, stopping in Segesta, one of the best preserved and beautiful of the Greek archaeological sites in Sicily.  This remote rural setting is really a magical place.  The ancient Greek temple is one of the best preserved that we have visited and the amphitheater, with it’s hilltop position on Mount Barbaro, is equally impressive.  Segesta was originally founded by the Elymian people, one of the native people of Sicily that no one seems to have much info on, and later integrated with the Greeks creating this important classical town.

Arriving in Erice, we stayed in Trapani at the Baglio Soria Resort & Wine Experience.  This 11 room resort is housed in an ancient Baglio from XVII century.    We had two lovely dinners here with excellent wines to match. 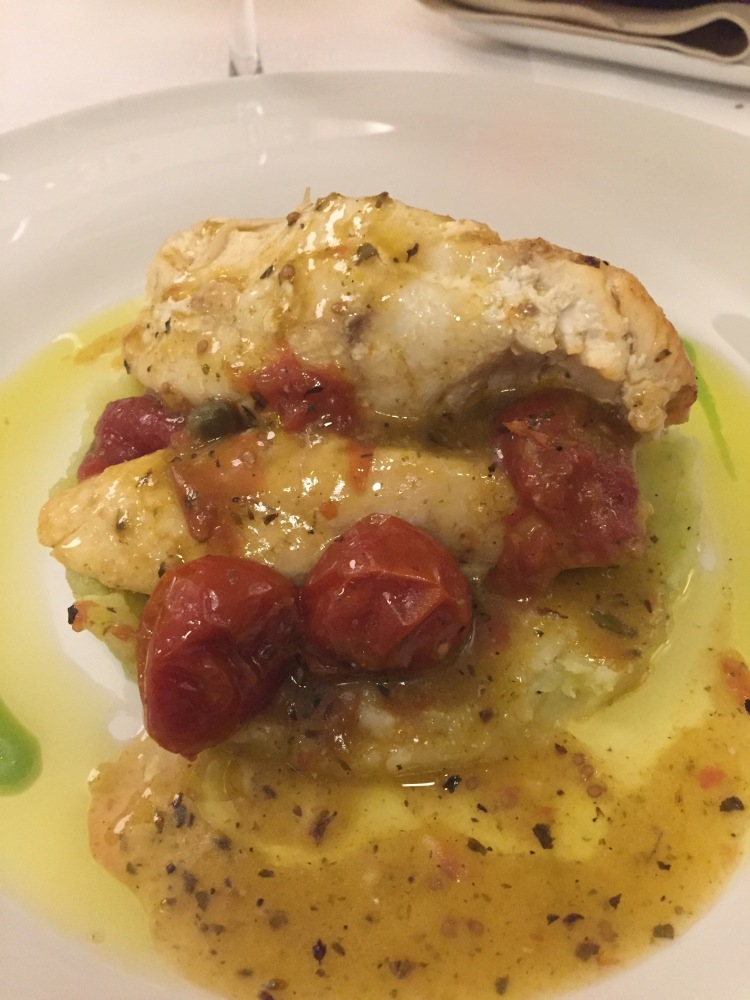 The next morning we set off to explore Erice.  This is a charming medieval hill-town complete with castles, walls and stone streets.  But look a bit closer and you will see their ancient origins. The ancient city, Eryx,  was a prosperous Elymian and Carthaginian city, boasting a well-known temple to a Phoenician fertility goddess, Astarte (later identified with Venus and worshiped by the Romans).

Erice is basically triangular in shape, with steep lanes leading up and around from the Porta Trapani gateway, where you’ll find the cable-car station (a much easier way up than driving the steep road to the town). The best way to begin is to follow the town walls from Porta Trapani around to the right to reach the Castello di Venere (Castle of Venus), at the wild back of the crags; the furthest point of the triangle. In front is a shady park, the Giardino del Balio, surrounded by stone busts and some excellent views.  The 12th C Castello di Venere, is entered through a gateway and up a flight of stairs, where you emerge into an open walled space built onto the bare rock.  The most compelling sight is the stupendous view from the fortifications. You can see the sea, the coastline and the crags along with some of Erice’s other ruined fortifications, including the fairy-tale Toretta Pepoli, a small ‘castle’ built onto the rocks. 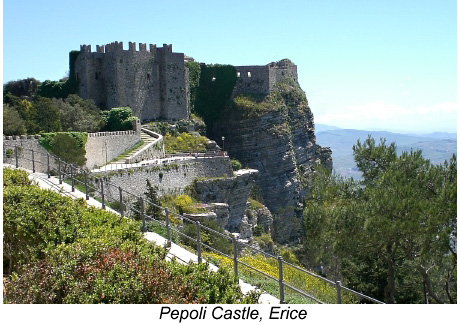 We ended our trip with two days in Palermo (stopping in Montrale, a historic hill-town just outside, to view the town’s great Norman cathedral filled with fine mosaics).

Loved Palermo and wished would have stayed an additional day or two.  Strolled the outdoor markets, the old town, and scheduled a private day tour to see the sites. Virginia Turco, from Guida Turistica Abilitata, gave us the tour and she was extremely knowledgeable, enthusiastic, and very likable! All making the tour very special.  We spent 3+ hours touring the Massimo Theatre, Palermo Cathedral, Palace of the Normans, & Politeama Theatre.

The Phoenicians were the first to occupy Palermo, followed by Carthaginians, Romans, the Greek Byzantine powers, Arabs, and the Normans.  The Norman’s tolerant approach to the city’s Arab characteristics created an environment in which diversity flourished.  The result is a ethnically varied, thriving city.

And we of course drank lovely wine and dined!  Our favorite restaurant was Gagini.  Also ate at Casa Del Brodo, but would suggest passing as it was pretty ordinary.  One of the dishes below was this great risotto Allison ordered.  I had fresh pasta with beef cheeks and shaved black truffles.  Everything was delicious.